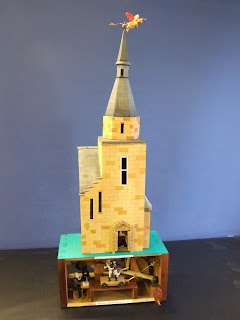 I was commissioned to make this automata donations box for The Wrexham county Museum in Wales.It's 1.20 mt. High (47 Inches)
As people insert a coin, a Welsh dragon will start to fly in circles around the top of the tower. The dragon will be alike the one in the “Waking the Dragon” project. 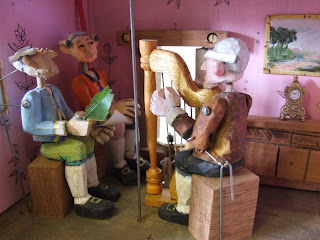 As your eyes go down the building, one of the windows will open and inside the blind John Parry playing his harp. Next to him David Garrick will turn his head in admiration towards Sir Watkin who is standing next to him and nods in admiration and approval. Then the window closes to let them enjoy the music. 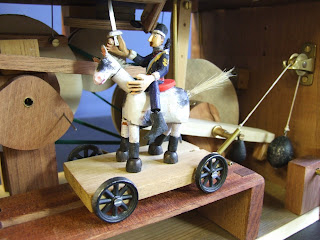 Down as a centre piece of the Automata you can see in full vision “Balaclava Ned” on his horse. He is about to charge and as he does so his horse collapses to the ground making a lot of noise, disturbing “William Lowe” who is sitting at his desk on the left hand corner drawing the plans for the Chanel Tunnel. He stops and turns to see “Balaclava Ned” who is under his horse. William Low makes the hushing sound with his finger to his mouth – he is not amused and looks back at his drawing and carries on working. 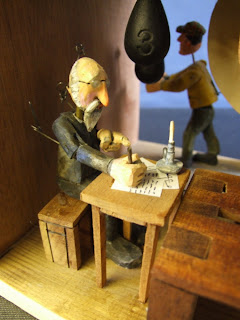 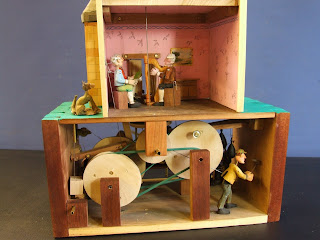 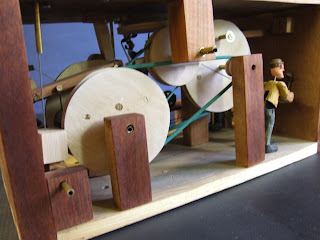 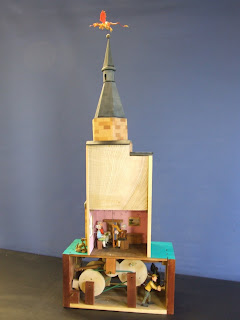 It was fun to work in this coin operated automaton
Posted by Carlos Zapata Automata at 21:06

Carlos Zapata Automata
Falmouth, Cornwall, United Kingdom
Working from my studio in Mabe, Cornwall UK I have been making kinetic or mechanical sculptures professionally since the 90s. I am a self taught Automata artist, who often accepts commissions for my sculptures from both private and public collectors worldwide. My sculptures are made out of wood and metal, and I often use reclaimed wood and scrap (or recycled) metal in my artwork, as I believe this makes the sculptures even more unique, with a story behind the story. I take my influence mainly from South American, Asian,African and British art and my work is colourful and full of emotion, and often carries a political or social comment, in sharp contrast with humorous language.

Examples of my Automaton