Automaton commission for the Trelissick Gardens, Cornwall. Hand operated, with 4 handles for visitor to learn about The gardens and it's history.

Posted by Carlos Zapata Automata at 17:10 No comments:

Dear Friends,  I just finish this little man for those that may need him.
If your heart have been broken, the Heart Broken Repairman will fix it.
Continue to share your heart with friends and family and rebuild your self.
This work is for sale zapataartinfo@googlemail.com

Posted by Carlos Zapata Automata at 08:38 No comments: 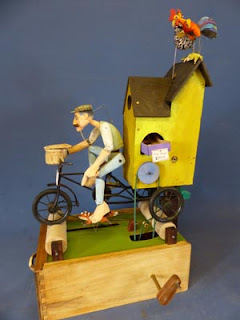 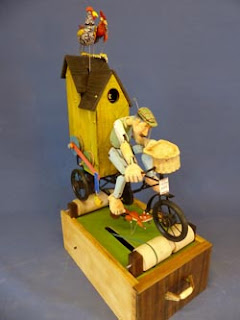 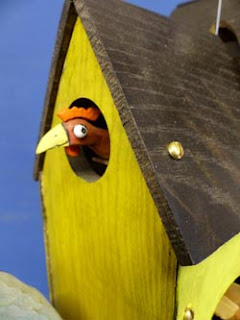 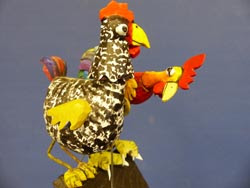 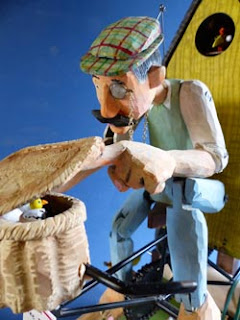 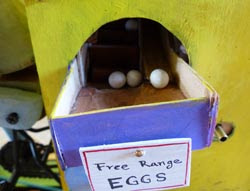 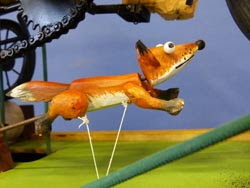 Posted by Carlos Zapata Automata at 15:34 No comments:

This automaton is about Anne Killigrew who lived in my home town Falmouth UK Its been commission by the Falmouth Art Gallery. Anne Killigrew (1660—1685) was an English poet. Born in London, Killigrew is perhaps best known as the subject of a famous elegy by the poet John Dryden entitled To The Pious Memory of the Accomplish'd Young Lady Mrs. Anne Killigrew (1686). She was however a skilful poet in her own right, and her Poems were published posthumously in 1686. Dryden compared her poetic abilities to the famous Greek poet of antiquity, Sappho. She also was a painter, only 3 of her painting survive out 0f 30. Killigrew died of smallpox aged 25. 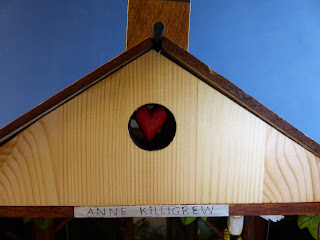 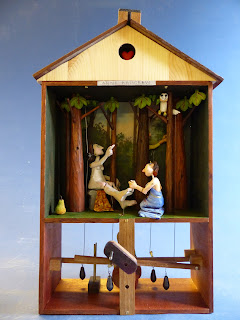 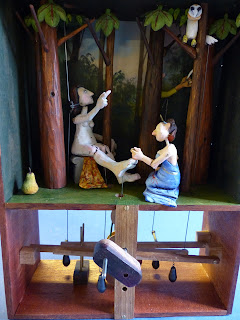 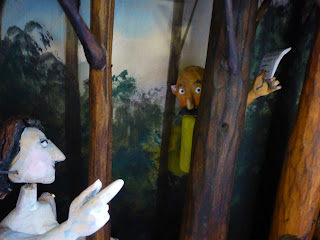 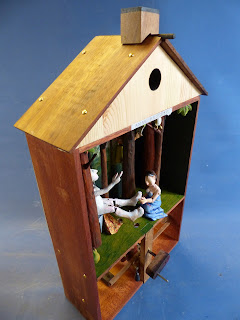 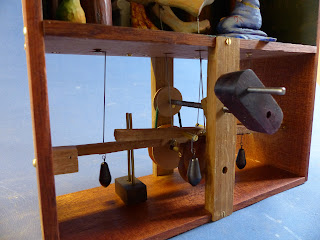 Posted by Carlos Zapata Automata at 21:32 No comments:

Nero The Lion 2013 81 cm High (32 Inches} wood and Metal Coin operated Automaton. Automata mechanical kinetic sculpture. In the 1920s a lion scape from a traveling fair in Birmingham for 3 days until it was capture with the football net of the famous Aston Villa football club. This is a coin operated automaton, commission by the Aston Hall Museum, One of Birmingham's most treasured buildings. Redisplayed as part of the development project, Aston Hall boasts sumptuous interiors from the 17th, 18th and 19th centuries, including the magnificent Long Gallery. Display rooms illustrate the part Aston Hall and its residents played in key moments in history, including the English Civil War, and how it prepared to receive royalty on more than one occasion. 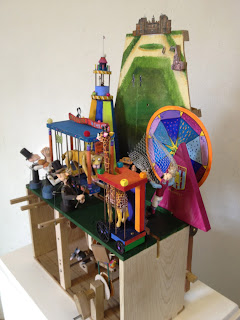 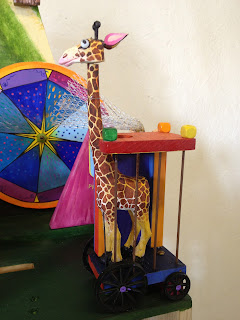 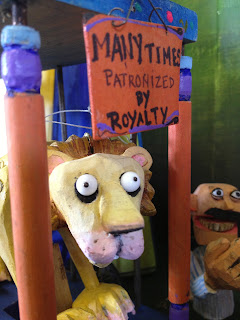 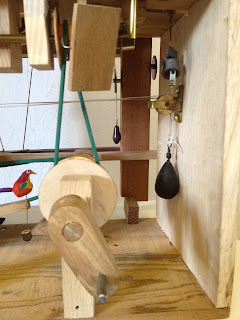 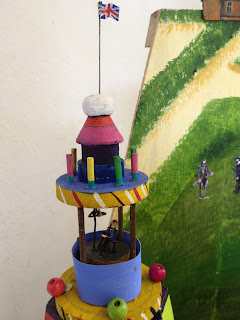 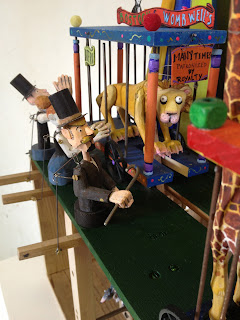 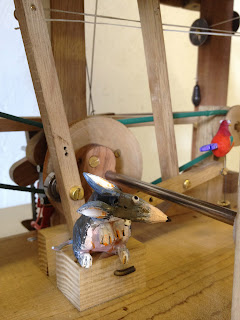 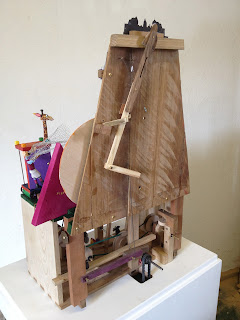 Posted by Carlos Zapata Automata at 21:52 No comments: 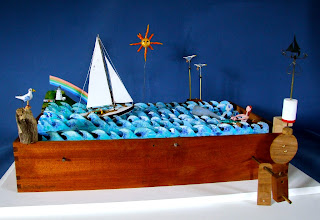 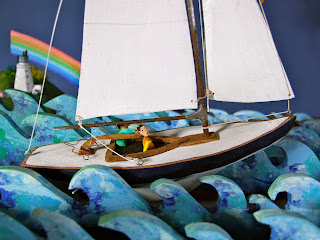 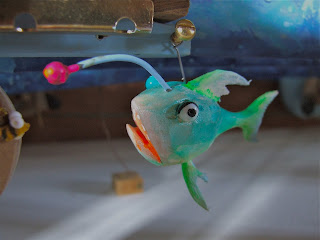 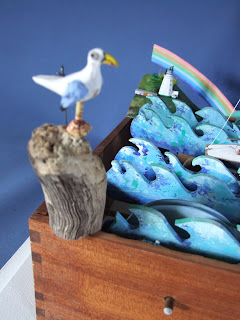 Posted by Carlos Zapata Automata at 18:11 No comments:

I am having an exhibition of 16 works, Call 'Child Soldiers' In the millennium Gallery. In St. Ives UK http://www.millenniumgallery.co.uk/ This is the introduction from Joseph Clarke the director; Carlos Zapata’s latest series of intimate and emotive sculptures and automata have at their core the humanitarian often violent struggle of the innocent, often children, who are drawn in to the maelstrom of war. Zapata was born in conflict torn Colombia in 1963, so the themes within this exhibition have generated from a profound awareness from a young age, where children were both forcibly and voluntarily recruited and used by armed opposition groups. Elaborating on experiences from his own personal life, Zapata delves into the human stories behind war from both ends of the spectrum - how people deal with, and deal out, violence. What people are capable of when comfronted by extreme circumstances - bravery and cowardliness alike. Put simply Zapata says “death and survival comes on a daily basis for some people” Zapata has been based near Falmouth for the past 20 years, but continues to make art that has a political or social commentary. He is a self taught artist, who has been producing kinetic or mechanical sculptures known as Automata since the late 1990’s – the playful element of automata creates a paradox within the work. The act of play that they inspire creates a shocking and emotional contrast to the subject depicted. He prefers to carve in wood, which is then painted with acrylic and oil, often distressing the surface, sanding and painting again, many times until it looks like skin or a textile. The metal work, is often reclaimed or scrap – the works have been influenced hugely over the years by Folk and Tribal Arts from all over the world – including his home country.
Posted by Carlos Zapata Automata at 16:33 No comments:

Carlos Zapata Automata
Falmouth, Cornwall, United Kingdom
Working from my studio in Mabe, Cornwall UK I have been making kinetic or mechanical sculptures professionally since the 90s. I am a self taught Automata artist, who often accepts commissions for my sculptures from both private and public collectors worldwide. My sculptures are made out of wood and metal, and I often use reclaimed wood and scrap (or recycled) metal in my artwork, as I believe this makes the sculptures even more unique, with a story behind the story. I take my influence mainly from South American, Asian,African and British art and my work is colourful and full of emotion, and often carries a political or social comment, in sharp contrast with humorous language.

Examples of my Automaton